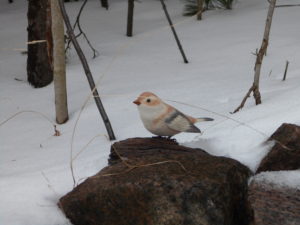 This week we saw a Snow Bunting as we drove through the beautiful Keene Valley in the Eastern Adirondacks. Like the Ross’s Gull, the Snow Bunting breeds in the high arctic where it nests in rock crevices lined with fur and feathers for warmth.

They winter as far south as the northern US, and are most often seen on grassy roadsides eating seeds and small insects. This is of a carving I did of a Snow Bunting in its subtle winter plumage. I don’t have a good photo of a Snow Bunting because we usually see them flying away as we drive. Snow Buntings in flight looks dazzlingly white earning them the nickname of Snowflakes.

It’s always a treat to see this little visitor from the far north. 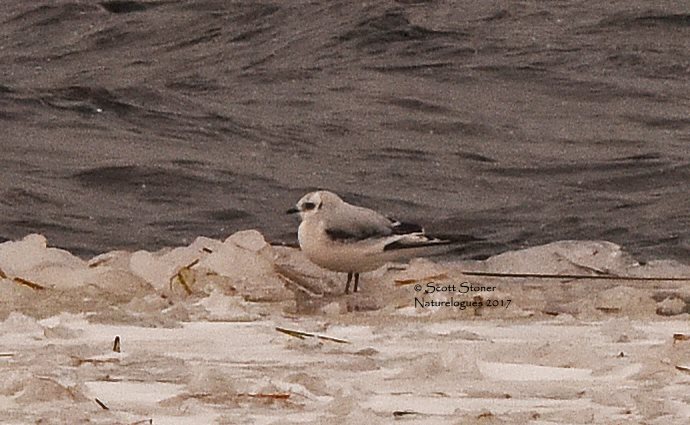 On Saturday, January 28, Joan Collins, an Adirondack bird guide, invited us to look for the rarest bird in North American, the Ross’s Gull. This diminutive gull, not much larger than a Robin, breeds in Siberia, and is a rare visitor to Arctic Canada. One had been sighted along the Raquette River in Tupper Lake. Word went out on the Internet and avid birders dropped everything to race to the remote central Adirondacks.

We searched for a couple hours without success then decided to enjoy some of the other birds in the area such as the Barred Owl and the Gray Jay. As we drove south along the river a woman in our group caught a brief glimpse of a white bird landing on the ice next to a stretch of open water. There it was! a small pale gull, 200 yards away.

Soon over a hundred people arrived armed with huge telephoto lenses and spotting scopes. Many had traveled here from as far away as Georgia with the hope of sighting this bird. Two State Troopers showed up to see what the trouble was, and were astonished to find a bird was causing the traffic jam. After hearing Joan’s explanation they stopped trying to break up the group, and helped organize our cars on the shoulder of the road. It was my first experience with the world of extreme birders. Even though I was delighted to see such a rare bird I have to confess walking quietly in the woods is more my style. 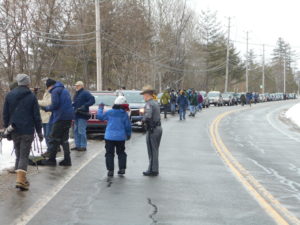 Thank you to Joan for an exciting day of birding and to Scott Stoner Naturelogues for sharing a photo my small lens couldn’t capture. 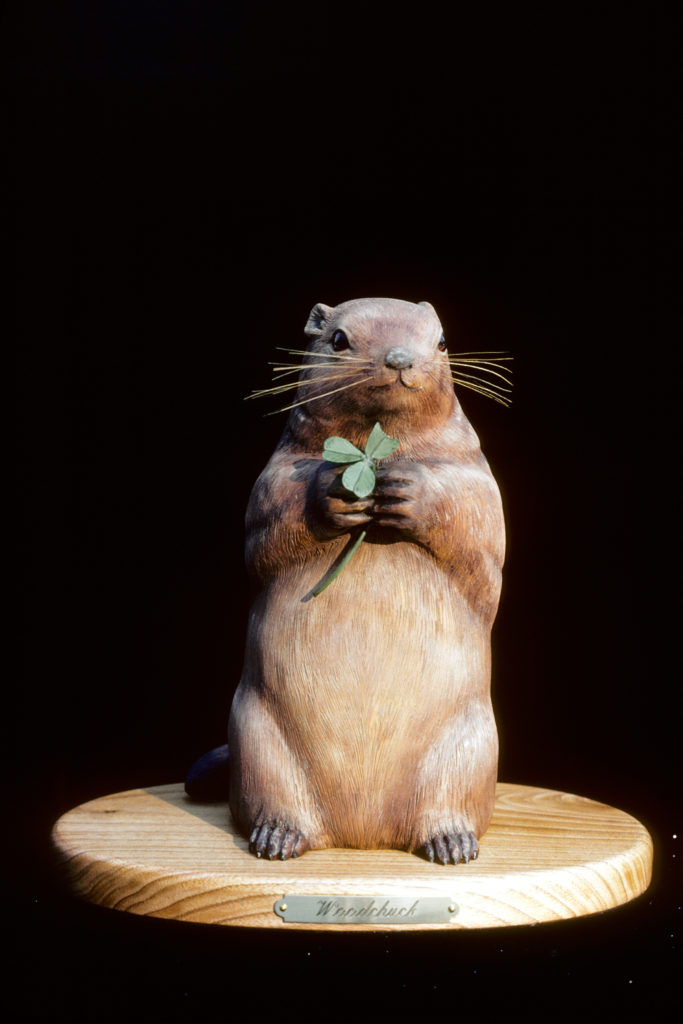 Luckily it’s been a fairly mild winter and we’re in good shape this year.

Groundhogs, or woodchucks as they’re known here, are fairly rare in the deep woods. But one year we had a handsome fellow set up housekeeping in our yard. He stayed all summer, and then disappeared in the fall. He especially loved eating the tender clover that grows in our lawn. We don’t use any pesticides or herbicides, and the deer, snowshoe hares and voles are welcome to eat as much as they want..

Before he left I made a carving of him and wanted to share it with you. Have a Happy Groundhog Day! 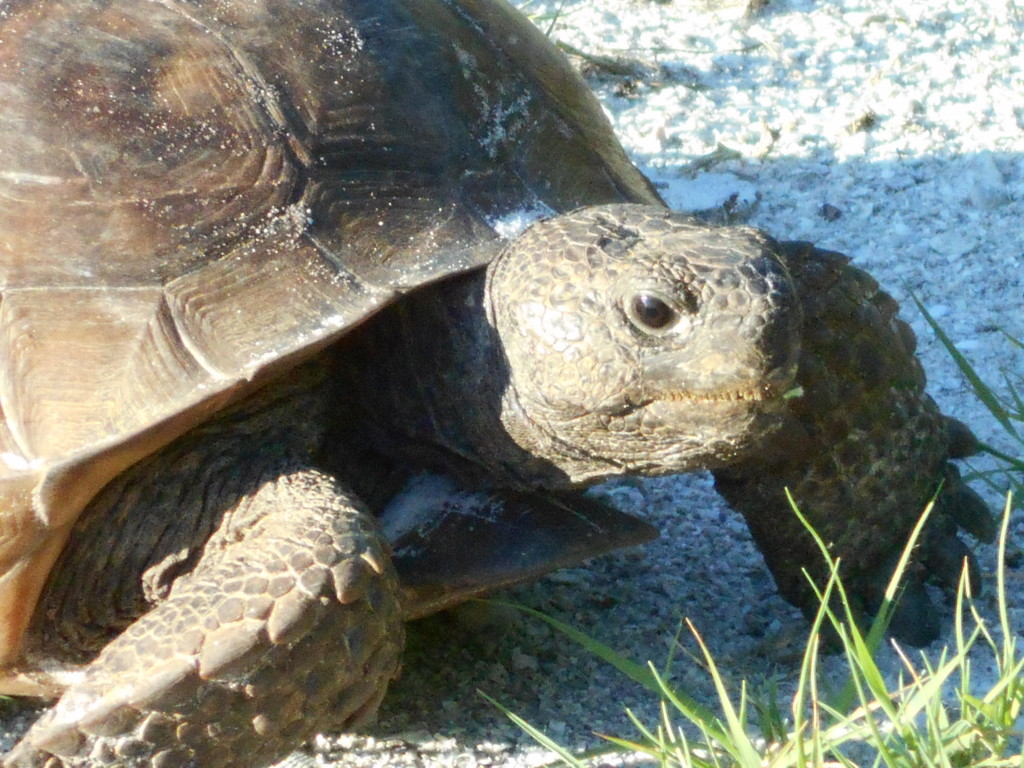 Birds are not the only wildlife on Sanibel. This gopher tortoise lives in the dunes, a wild tangle of sea grapes, century plants, and cordgrass between the grounds and the beach. On nice afternoons it ventures onto the lawn to eat tender new shoots. They can move with surprising speed when necessary.

Cars are one of their few enemies. The speed limit on Sanibel is 30-35, and signs warn motorists to stop for crossing tortoises. We’ve also seen raccoons, marsh rabbits, and once or twice a skinny, island bobcat. I’ve never carved a tortoise, but I think this year I’ll give one a try.

The Birds of Sanibel 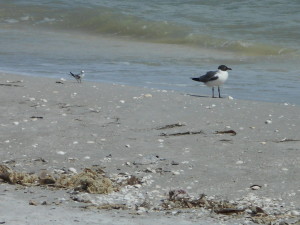 The mangrove swamps and mud flats are not the only locations for birding on Sanibel. The beach is also a good place to spot birds like the Least Tern. This tiny tern is smaller than a robin, but dives fearlessly into the waves to feed on small fish. They are considered threatened in Florida because development on the beach has reduced their nesting habitat. Fortunately there are a few places, like Sanibel and some areas on Fort Myers Beach where their nest sites are protected. 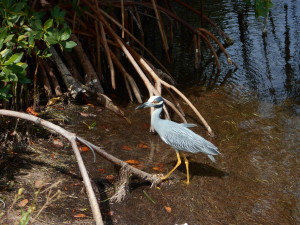 Ding Darling Wildlife Refuge on Sanibel Island off the Gulf Coast of Florida is one of the best places to see shy birds up close. This Yellow-Crowned Night Heron was hunting crabs in the tangle of mangrove roots along Wildlife Drive when we visited at low tide.

The Night Herons are more nocturnal than most herons, but won’t pass up a tasty crab even in broad daylight if they are hungry. They roost in small groups in the Refuge. We’ve seen their nests, and the eggs are the most unbelievable sky blue. The baby herons are noisy and rowdy, always begging their hard-working parents for more food.

Black-Crowned Night Herons also live in the Refuge, and I hope to get a good photo of one while we’re down here. I’ll let you know if I do.

A favorite of children around the world, these Russian toys were first made over 300 years ago in the small village of “Bogorodskoye”. They are still handcarved using traditional tools from Linden wood, also called Basswood. They seem to come to life when you swing them in a circular motion.

I have been collecting them for years, and this one is a gift from a friend. It’s inspired by the Aesop Fable where a fox tricks a crow carrying a piece of cheese. The fox asks to hear the crow’s beautiful voice. When it opens its beak to sing, it drops the cheese and the happy fox trots off; the moral being, “don’t trust flatterers.”

The Woodcocks Have Arrived! 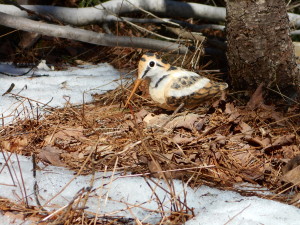 I just saw the first Woodcock of the spring on the path to my woodshed. Also known as “Timber Doodles” they usually come north a little earlier. I think the late spring delayed them a week or two this year. They’ve always been one of my favorite birds, and this photo is one my early bird carvings. Their eyes are positioned high on their head so they can see above the ground cover which makes them look both goofy and serious at the same time. The long beak is used to dig out earthworms, their favorite food.

If you’re lucky, sometimes you can see their spring courtship display. It begins after sunset, when it’s just dark enough to see the first stars. The males come out of the woods into a grassy area and begin making a nasal “beeping” sound at regular intervals. After a few minutes of this they take off in a high spiraling flight. Their wings make a loud twittering sound as they circle in the twilight sky. Then they land with a audible “thud” in the same spot where they started, and begin beeping again.

Meanwhile the female is watching from the grass and hopefully will be enchanted by his display. Apparently it works, once or twice we’ve seen Woodcock chicks in the yard late in the spring. Like the adults they are nearly invisible on the forest floor. 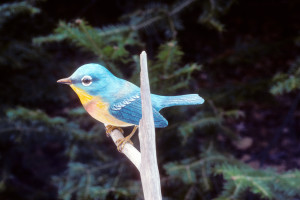 Spring really is coming. Despite the six inches of fresh snow this weekend two chipmunks poked their heads out of the ground, and bright yellow Goldfinches were mixing with the Redpolls at the birdfeeder. The Redpolls will be heading North soon, but the Goldfinches will be around all summer.

In a month or so the first warblers, like this little Parula I carved a few years ago, will be migrating through the Adirondacks. It’s one of my favorite times of year. If you’re lucky enough to find yourself in the middle of a mixed flock it’s like being surrounded by flying Easter eggs. They are so tiny and bright. I always wonder how such delicate creatures can make such long journeys. I worry about the dangers they face, and I’m always delighted to see them arrive safely in their summer home.

Several species nest in my yard including the Myrtle (aka yellow-rumped), Magnolia, Black-throated Green, and Redstart. We see others too, including one of my favorites the Blackburnian. They like to feed high in the spruce tree near my front door. I can’t wait until they’re here again.