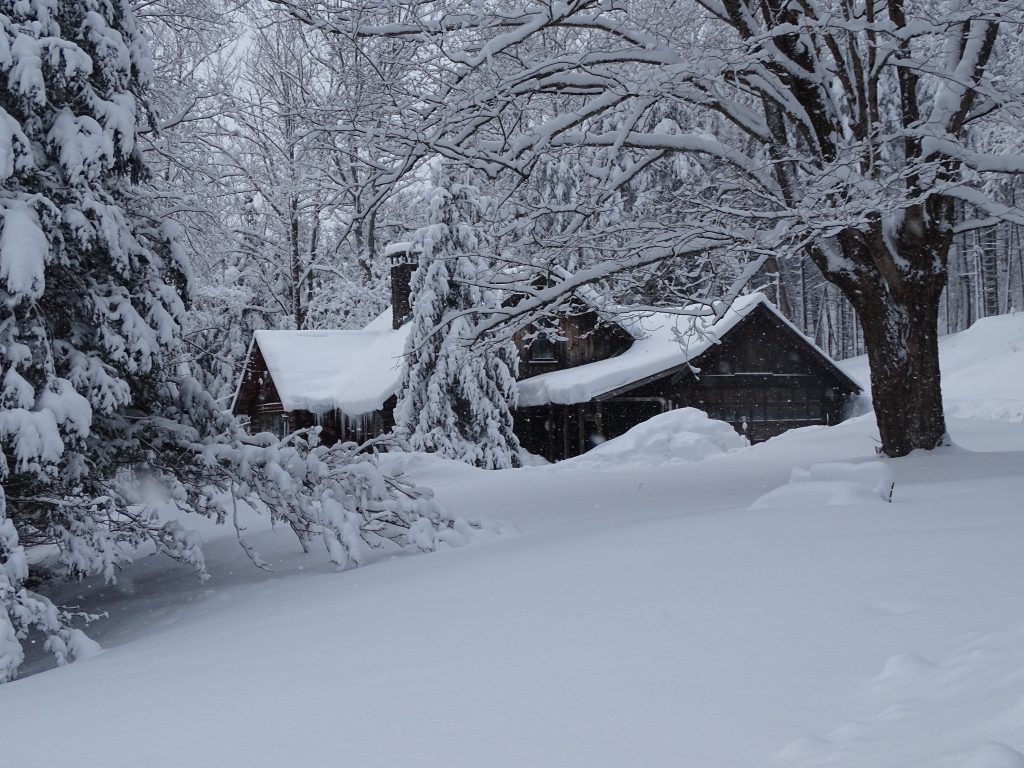 Well our corner of Hamilton County in the Adirondacks was targeted by two back-to-back snowstorms. It was the first time I can ever remember a 24-hour Blizzard Warning being posted. So far we’ve only gotten about 18 inches with a total base of 24 inches.

As my elderly neighbor used to say, “ Some folks who ain’t seen snow might say this looks pretty.”

Oh, and the Goldfinches have returned to the birdfeeders. More about that later. 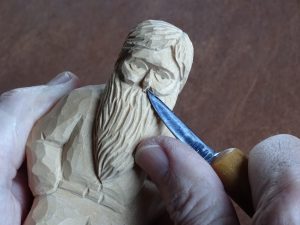 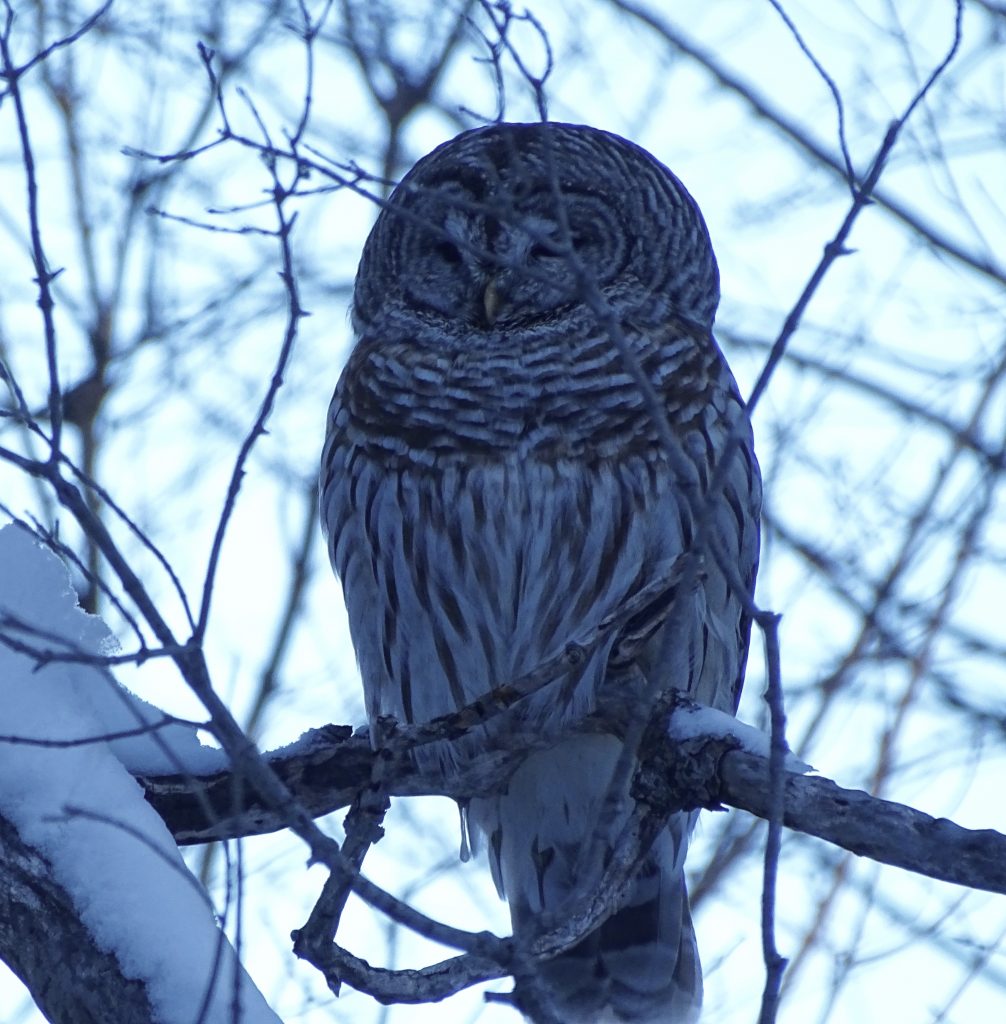 We finally saw the Barred Owl that has been calling around our cabin. Their distinctive call, “Who cooks for you. Who cooks for you all,” is unmistakable. They are a deep woods bird with unusual dark eyes; most owls have yellowish eyes.

Barred Owls are hard to spot. They roost quietly during the day, and are sit-and-wait predators at night. We saw this one just before sunset, quietly watching the chickadees at our feeder. It was probably waiting for an unwary squirrel to make an appearance. They also hunt smaller mammals such as mice and voles. Their prey becomes harder to find in winter when deep snow covers the ground.

Since the owl has been around we have seen fewer red squirrels – a favorite food. Unfortunately our flying squirrels have also disappeared.

I think he would make a good woodcarving someday. Right now I’m working on a flying Great Horned Owl. I’ll post some photos as I carve him. 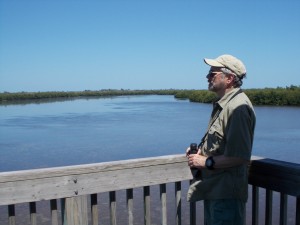 In 2004 Rick was named Woodcarver of the Year by Woodcarving Illustrated.
“Presented to Rick Bütz ~ Through his craftsmanship and artistry, his expertise as an instructor, his contributions to publications and other media, and his promotion of woodcarving, Rick has earned respect and praise from the carving community.”

The article by Roger Schroeder is available on Woodcarving Illustrated’s website:
http://woodcarvingillustrated.com/blog/2016/10/04/rick-butz-2004-woodcarver-year/

Thank you to Roger, it was an honor to be recognized by your publication. 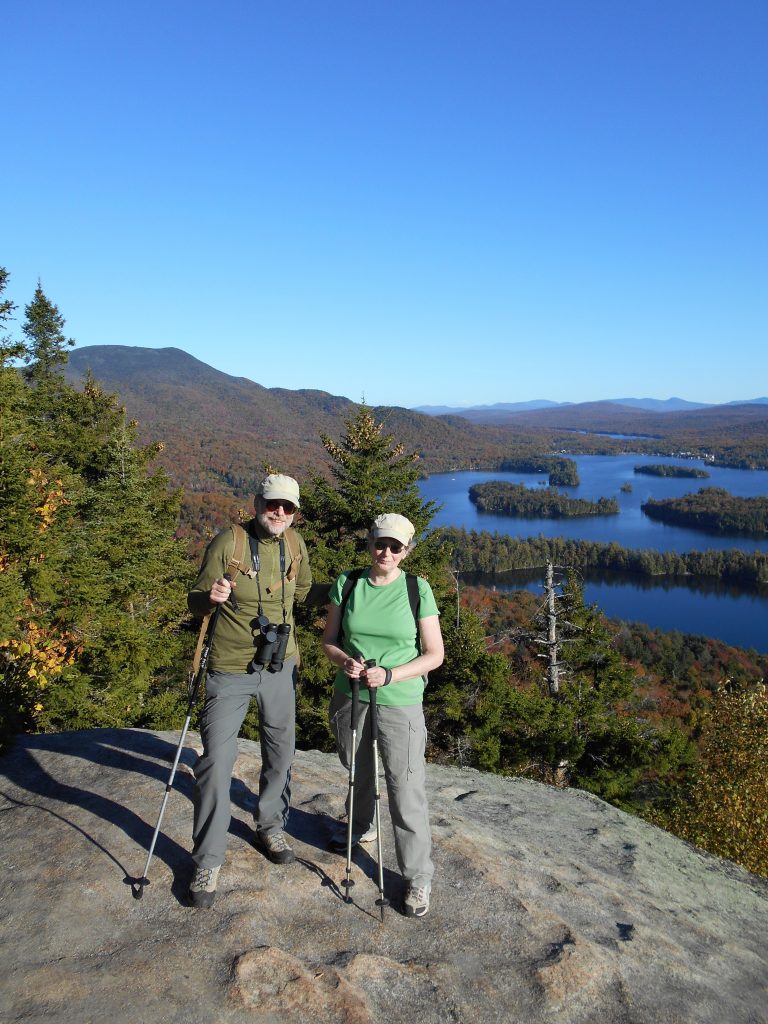 Our first class will be a weekend workshop on Chickadee carving at beautiful Prospect Point Cottages in Blue Mountain Lake March 1-3.

For all the details see the “Classes” page on our website.

Hope you can join us! 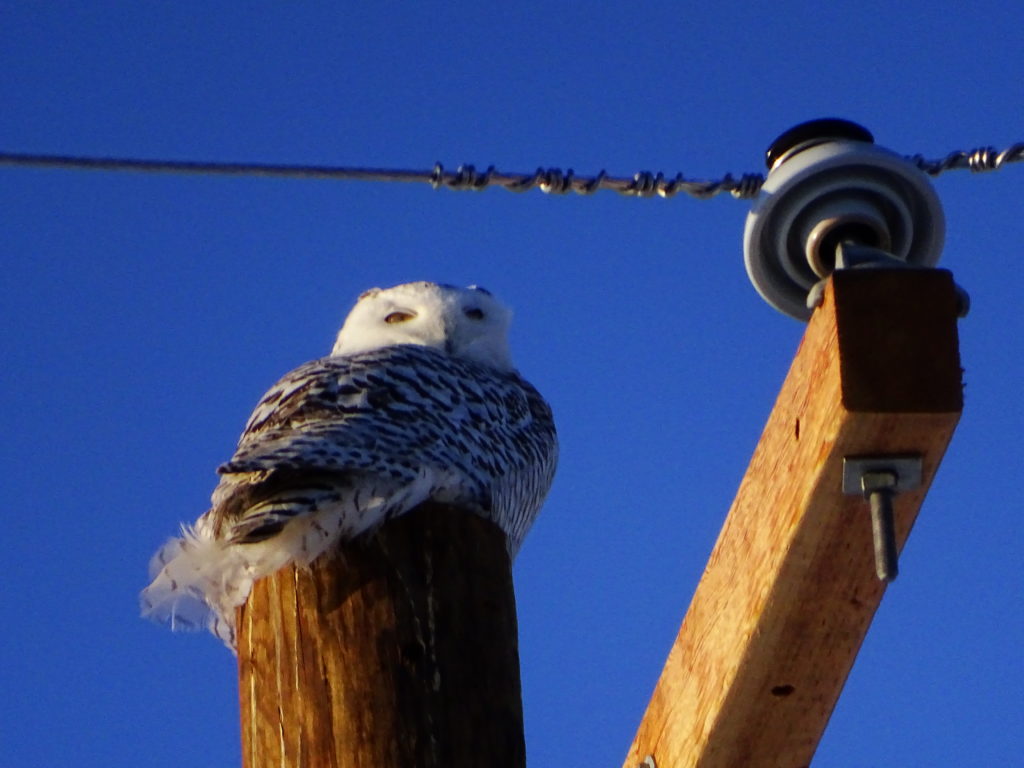 Recently Ellen and I were invited by a group called the Friends of the IBA (Important Bird Area) to look for Snowy Owls near Fort Edward, NY. This nonprofit group is working with farmers and other landowners to protect 2,000 acres of remaining grassland, which is critical for many endangered and threatened birds. So far they have been able to preserve over 300 acres of this vital habitat.

We discovered that Snowy Owls migrate from the arctic to the snow covered grasslands of the Northern US in years when food is scarce. They live on lemmings and mice and eat up to 1,600 in a single year. This is an important factor in keeping these highly reproductive rodents under control.

The Snowy Owl has been highly regarded throughout history. Our Paleolithic ancestors even left painted images on cave walls in Europe over 20,000 years ago.

We searched for several hours and were packing up to leave when this Owl flew out of a snowy field and landed on a telephone pole over our heads.

Like they say… success in birding depends on a combination of perseverance and luck. 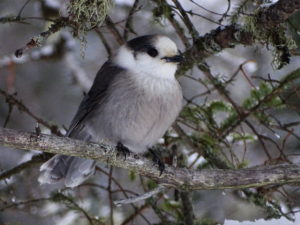 Canada still hasn’t chosen a national bird and many people are pushing to make it the Gray Jay. I agree. They are cute, hardy and friendly. And, unlike other birds, they choose not to migrate when winter comes. Instead they brave the ice and snow; even nesting and raising chicks in spite of the freezing weather. Recently I was lucky to see several near Long Lake in the Adirondacks. 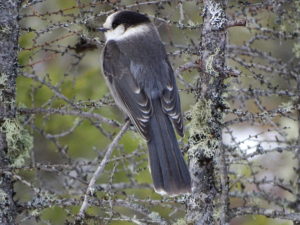 The secret to their survival is to cache bits of food under the loose bark of conifer trees. They can hide as many as 1,000 little food packets a day, and astonishingly remember where each one is. This is due to a highly developed hippocampus region in their brain. This gives them an unprecedented memory.

So the next time you are hiking in a northern boreal forest keep an eye open for this gregarious. hardy bird. 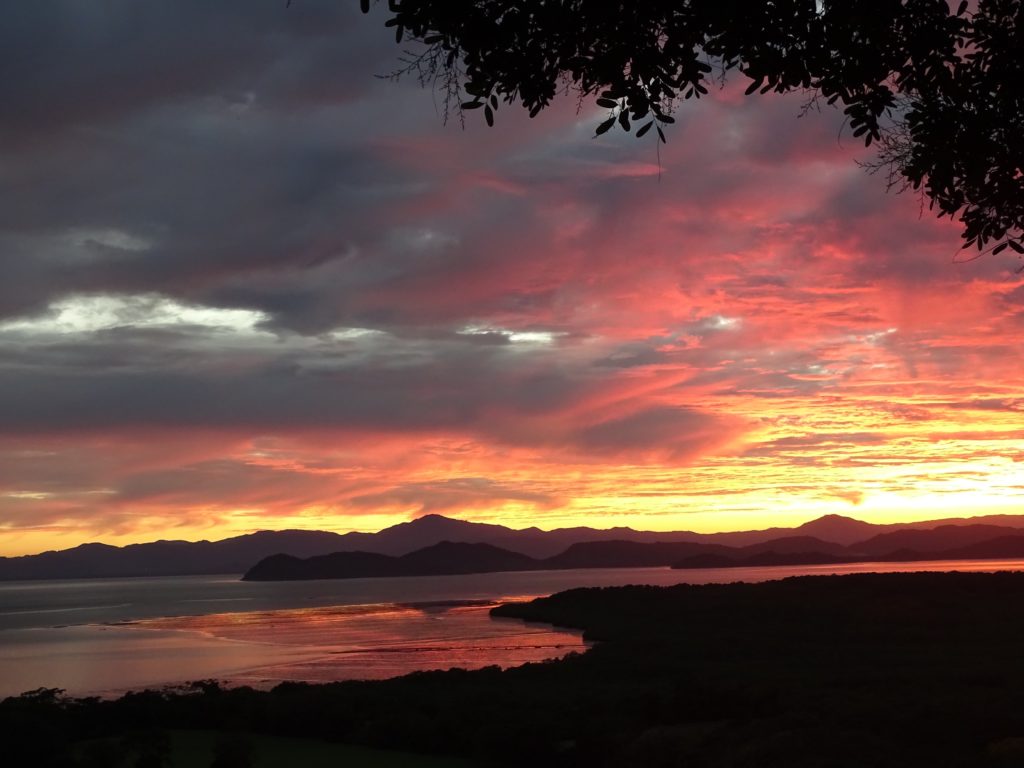 Recently Ellen and I had the opportunity to visit Costa Rica. We traveled with a Road Scholar group in what they described as, “Birding off the Beaten Path in Northern Costa Rica.” 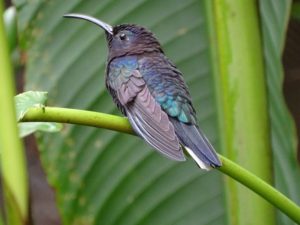 They were right! We visited rain forests, Northern wetlands, Caribbean lowlands, and tropical dry forests. We were fortunate to see 242 new birds as well as many birds that migrate from our area to winter in Costa Rica.

It was enlightening to see how Costa Rica has set aside so much land to preserve critical habitats for endangered wildlife. And, at the same time, provide an active livelihood for so many people in the rural countryside. 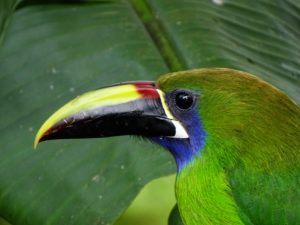 The trip was exceptionally well organized and I highly recommend Road Scholar.

In search of the Phantom of the North

The Great Gray Owl is North America’s largest owl by height and wingspan. They are rarely seen, hence the name “Phantom”. They live in the boreal forests of North America, Scandinavia, and Northern Russia. Although rare in the Adirondacks, one was spotted in Keene. So one cold March afternoon we went searching for it.

We drove about two hours to the location of the last sighting. Luck was with us. Fortunately the Great Gray hunts in open areas at the forest’s edge and we arrived just in time to see it perched a quarter of a mile away in a small tree watching for voles and field mice in the snow.

We got our spotting scope and camera set up and managed to get a few pictures before it abruptly flew away. The Grey Owl’s camouflage pattern of light and dark grey blends perfectly with tree bark making it virtually invisible. We felt lucky to have been able to catch a brief glimpse of this magnificent owl before it disappeared into the frozen north woods 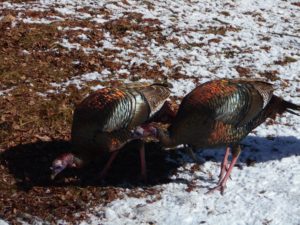 Wild Turkeys have made a spectacular comeback in the Adirondack Mountains. When I moved here in the mid-1970s Wild Turkeys had been hunted out of existence. Now we often see them trooping through our yard in the summer followed by a brood of fuzzy young ones.

This winter a small flock of about six has discovered our bird feeders. They peck and scratch in the snow looking for dropped seeds. One enterprising male was even spotted standing on a snow bank, stretching up to pick seeds out of my “Squirrel-Proof” chickadee feeder. On cold days we toss an extra cup of seed and corn on the ground for them. They’ve learned to come running when they hear the door open.

Turkeys prefer to walk or run, but when threatened they can fly. The great whoosh of feathers when they take off is enough startle any would-by predators.

They are ground feeders, eating seeds, nuts, tender evergreen buds, and the occasional snail, salamander, or insect. They roost in trees at night, but nest on the ground with the females providing all the care for the young. 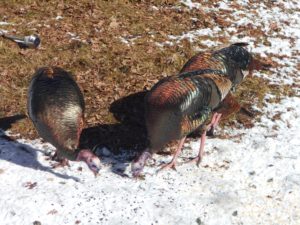 Although they look dark brown in the forest, when the sun hits them they blaze with metallic bronzes, greens, and gold. I’ve made Turkeys before and it’s a challenge to carve their fanned tails and extended wings. It’s especially tricky to capture the iridescence of their feathers. I’ve found brushing bronzing powders over the final nearly dry paint works the best. In the meantime, they put on a pretty good show during the long winter.